Kate Dickson: A Passion to Protect 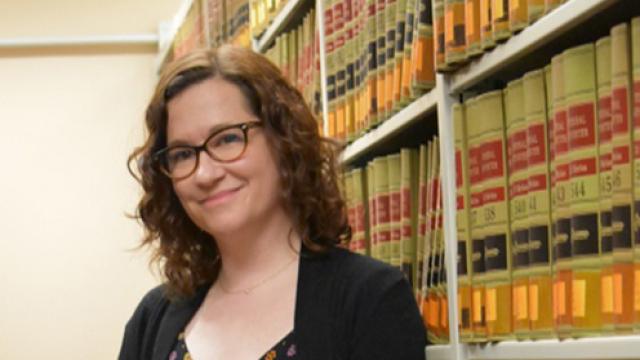 Kate Dickson knows all about “the right thing” and when she follows her passion, it’s never about her. It’s about making sure others are supported and are given a fair deal.

“For me, it’s all about helping people,” says Dickson, Atkins’ Copyright and Licensing Librarian. “As an attorney, I worked on lots of issues that I cared about passionately. One of those things is voting, something so many people had to fight for over the years. My experience and what I know about the law, help me recognize my obligation to make sure certain rights are not violated. Voting is the most fundamental right that we have and people need to be able to exercise that right.”

For several years, Dickson has volunteered with the election process, typically for presidential
elections. As a poll observer and a volunteer for the voter protection team, 2020 made that experience different from any other election year, an outcome mainly due to the pandemic.

“This year the election process was different. So many people voted by mail and absentee ballot, for security reasons and because of uncertainty. They wanted to feel safe in exercising their right to vote. For those who physically went to vote at their precincts, it was our job, as poll
observers, to make sure voters were safe,” says Dickson.

Armed with full protection of masks and face shields, Dickson fulfilled her civic responsibility. “During election day I was a poll observer assigned to a church in Chapel Hill. It was different this time. There were plexiglass barriers between everyone and in front of everyone. Some election workers were going around sanitizing everything, spraying all the surfaces. This year, with this new activity, there was an extra layer added to my role. In addition to paying attention to how the election process was going for voters, we were also safety monitors, making sure things were going smoothly,” says Dickson.

But that added layer of support wasn’t too out of the ordinary for Dickson. She pursued her law degree for many of the same reasons—a desire to help people. “I didn’t go to law school with the intention to make a huge amount of money and gain lots of power. I went to help people who were disfranchised and mistreated. As a lawyer, I saw how power could be used in a good way. I was motivated by the thought of being able to use that power to help people,” says Dickson.

“Since everything has happened in the last year, people are much more motivated to get involved and contribute to citizenship. Opportunities are available all year round. People don’t have to wait until an election cycle comes around to get involved to contribute to society. There are all sorts of non-profit organizations that do a lot of work to help people on local and county levels. You can start with local precincts, community groups, and other organizations that you are passionate about,” says Dickson.