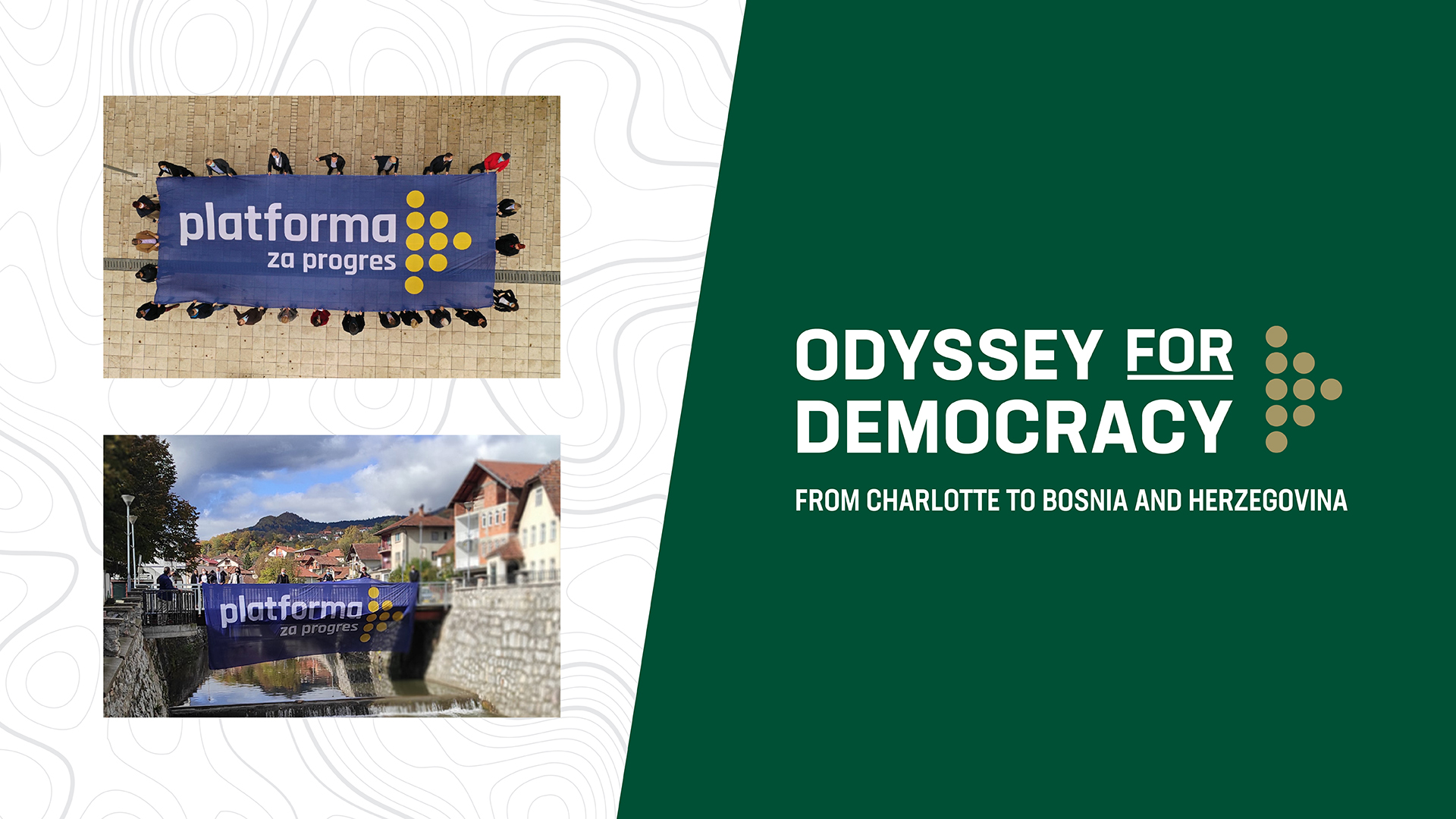 Join Atkins Library on Wednesday, April 6 from 1-2 p.m. for a panel discussion titled "Odyssey for Democracy: from Charlotte to Bosnia and Herzegovina."  The panel will be held both in-person in Atkins Library Room 143 and virtually on Zoom. A reception will follow in the Halton Reading Room. Please register to receive the Zoom link and other important event details.

The panel will feature Mirsad Hadžikadić, professor in the Department of Software and Information Systems at UNC Charlotte, who is running for the Bosniak presidential council seat in Bosnia and Herzegovina in 2022. Hadžikadić will be joined by journalist Clark Curtis, whose book, The Odyssey for Democracy: Embracing the Vision of Hope and Change in Bosnia and Herzegovina, covered Hadžikadić’s previous run for presidency in 2018 and was published by Atkins Library in partnership with UNC Press. John Cox, Associate Professor of History and Global Studies at UNC Charlotte, will moderate the discussion. For on-site participants, a reception will follow in the Halton Room with light refreshments and a book signing of Odyssey for Democracy.

Mirsad Hadžikadić’s professional career started in Bosnia and Herzegovina where he was a software developer and IT administrator in companies ranging from defense to medical electronics. Dr. Hadžikadić joined UNC Charlotte in 1987 after receiving his Ph.D. in Computer Science from Southern Methodist University where he was a Fulbright Scholar. He has published three edited books and over 40 scientific papers published in journals and conference proceedings. His research activities have been primarily focused on machine learning, data mining, data science, cognitive science, health informatics, and complex adaptive systems. From 1991 to 1997, Hadžikadić served as the Director of the Department of Medical Informatics and the Department of Orthopedic Informatics at the Carolinas HealthCare System. In 1998, he joined Deloitte and Touche Consulting Group as Manager in the Health Systems Integration Service Line. Hadžikadić returned full time to the University in January 1999 to assume Chairmanship of the Department of Computer Science and serve as the Associate Director of the School of Information Technology. He helped to shepherd the transition from a school in the College of Engineering into an independent College of Computing and Informatics, and served as its Founding Dean. Until 2018 Hadžikadić served as the Founding Executive Director of the Data Science Initiative at UNC Charlotte. He is currently a professor with a joint appointment in the Software and Information Systems Department and the School of Data Science, as well as the Founding Director of the Complex Systems Institute at UNC Charlotte.

Clark Curtis has been in the communications business for over forty years as a print and broadcast journalist and directing communications efforts in the public and private sectors. This included serving as the Director of Communications for the College of Computing and Informatics at UNC Charlotte. Since founding his own communications business and nonprofit organization in 2017, Clark has dedicated himself to supporting the voices of those trying to make a positive impact globally and serving as a voice for the marginalized who have no voices of their own. This has included an oral histories project devoted to documenting and archiving the stories of the survivors of the 1992 genocide in Bosnia and Herzegovina, as well as communications support for Phoenix Zones Initiative, a global nonprofit committed advancing the rights, health, and wellbeing of people, animals, and the planet, and ourBRIDGE for KIDS, a Charlotte based nonprofit, which offers trauma-informed after school and summer programs to refugee, immigrant and asylum-seeking children and their families, free of charge. Clark jumped at the opportunity to document and share the story of Mirsad Hadźikadić, his former boss at the University of North Carolina at Charlotte and longtime friend, upon learning of his decision to run for office—a story that Clark wanted to share with the rest of the world and perhaps could serve as a model for others. The Odyssey for Democracy is his first published book.

John Cox is Associate Professor of History and Global Studies at UNC Charlotte. Dr. Cox has published and lectured widely on genocide, racism, resistance, and human rights. His recent publications include To Kill a People: Genocide in the Twentieth Century (Oxford University Press, 2017) and his co-edited collection Denial: The Final Stage in Genocide (Routledge, 2022). Cox directs UNCC's Center for Holocaust, Genocide & Human Rights Studies and founded and directed a similar Center in his previous position, at Florida Gulf Coast University. He recently spent several weeks in Bosnia and has written articles and a book chapter about the genocide of 1992-1995.