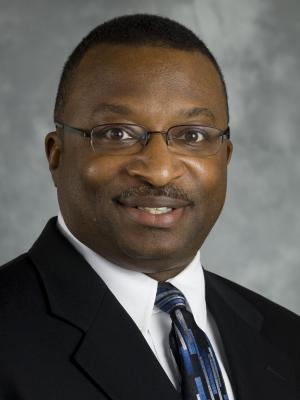 As a member of the Libraries’ administrative faculty, Gerald Holmes led the creation of the Libraries’ Post MLS Diversity Residency Program and its Diversity Committee.  As the Diversity Coordinator, Holmes took on the additional responsibility as a Co-Principal Investigator for three Institute of Museum and Library Services (IMLS) grants designed to recruit and prepare minority librarians for serving their communities in the 21st Century.  As a credit to his work, 55 librarians from underrepresented populations are now working.

Gerald served as a Co-Principal Investigator for the Library Diversity Institute Project funded by the Institute of Museum and Library Services.  Gerald’s research interest includes diversity issues, reference desk services, and the promotion of librarianship as a career.  Gerald also serves on the Chancellor's Advisory Committee for Equity, Diversity and Inclusion at UNC Greensboro.

Multiple organizations have recognized him for his contributions to diversity and equity. In 2014, he received the Outstanding Service Award from the UNC-G African American and African Diaspora Studies Program, and the American Library Association named him an Achievement in Library Diversity Research honoree. In 2015, he received the Black Caucus ALA Distinguished Service to the Library Profession Award, the North Carolina Library Association Distinguished Service Award, and the Harvey E. Beech Outstanding Alumni Award from the Carolina General Alumni Association.  In 2019, Holmes received the UNC School of Information and Library Science Distinguished Alumni Award.